The race is on to map the seafloor.

Much of the urgency to create a high-resolution map of the world’s ocean floor is based on the potential benefits: helping to manage fishing resources, improving marine navigation and guiding infrastructure construction, as well as better defining the impacts of the impending seabed mining boom.

This pressing need to map the seafloor led to the creation of the Nippon Foundation-GEBCO Seabed 2030 Project, an unprecedented international project to facilitate the complete mapping of the seafloor by 2030. Seabed 2030 is a major contribution to the UN Decade of Ocean Science for Sustainable Development (2021-2030).

But what stands between success and failure in the next 10 years is energy to operate more diverse and robust sensors without the expense and limitations of support from ships as well as energy to sustainably and economically scale to many thousands of sensors needed to cover the vastness of the ocean, and enable persistent ocean data collection.

The large-scale efforts currently underway are aspirational, but the ocean is big, and so far, we’ve mapped only 20% – which leaves an area twice the size of Mars yet unmapped. The simple truth is that seafloor mapping needs more sensors, along with innovative and cost-effective ways to deploy and power them if interested parties hope to win the race to understand and protect the ocean.

While ships are required for seafloor mapping in certain regions of the ocean, ships alone are not practical to map the vastness of the seafloor in a reasonable time frame – especially given the relatively small number available and the cost of operating them. Autonomous underwater vehicles (AUVs) have been increasingly used to extend the footprint covered by ships. However, AUVs have a relatively short life, mostly due to the finite battery capacity to power propulsion; the faster an AUV travels, the shorter the AUV mission life. Furthermore, AUVs need to be recovered periodically by ships for battery replacement or recharging.

Future ocean datasets will be gathered by comprehensive networks of low-cost ocean robots. There has been a rapid growth of autonomous surface vehicles powered by renewable energy from solar, wind and wave. There is an opportunity to add underwater vehicles such as profiling floats to further reduce dependence on ships and enable large numbers to cover the entire ocean. One successful example is the international Argo network with a global array of 4,000 profiling floats to measure environmental conditions like temperature and salinity down to 2,000 meters.

A recently announced $53 million expansion of funding from the National Science Foundation (NSF) will pay for an additional 500 biogeochemical (BGC) floats to expand data collection, including oxygen, nitrates, pH, and chlorophyll, in order to estimate the carbon in the ocean.

Such data are critical to understanding how human activity contributes to trends like sea-level rise, ocean warming, carbon dioxide increase, oxygen loss, ocean acidification, and algae blooms. However, more and more powerful sensors (e.g., echo sounders for seafloor mapping) require more energy from batteries, therefore increasing cost and reducing the float’s mission life. With today’s battery technology, 20% (or 800) of the Argo floats must be replaced each year. In addition to the environmental impact of these dead floats – though small compared to many larger pollution sources – it’s costly to deploy so many floats annually. It will also become increasingly expensive as more sophisticated sensors are added to these platforms.

It’s a reality that weighs on those working to understand the ocean, as shown by a survey at the OceanObs’19 conference that named energy as the single biggest challenge for sustained ocean observing systems.

How To Accelerate Efforts

The U.S. Department of Energy’s Powering the Blue Economy is a government initiative designed to accelerate new technologies that power coastal and maritime industries. Some technologies are showing promise, but governments aren’t the only ones working on solutions.

My company Seatrec is powering profiling floats using the ocean’s natural temperature difference. We are forging a public-private partnership to complement existing profiling float efforts by increasing their life span and the amount of data that can be collected. A global fleet of profiling floats powered by the ocean’s thermal energy has the potential to carry echo sounders to map the gaps of the global seafloor.

The simple truth is that multiple approaches are needed to accelerate seafloor mapping and build a network of complementary sensors to continually monitor the ocean’s water column in a cost-effective way.

A Win For The Ocean And Commerce

Winning the race to map the seafloor and better understand the ocean in time to regenerate the marine environment and derive socioeconomic benefit from it requires unique partnerships between governments, academic institutions and private companies. But the effort will also open the door to a robust “blue economy” with the potential to provide for environmentally sustainable, equitable and profitable use of the ocean.

Google Earth, for example, was originally envisioned as a way to serve noble causes such as rainforest preservation and international diplomacy but it also unlocked massive commercial applications that helped make Google one of the largest companies in the world. Real-time data from the ocean covering 71% of the planet holds even greater potential.

The Argo network shows how a large number of floats – once equipped with more powerful sensors and a renewable energy source – can provide a cost-effective, efficiency multiplier for quickly mapping the seafloor and providing long-term, continuous, real-time ocean data.

To me, it’s an investment that’s well worth it. Not only to keep the ocean healthy, but the technologies developed in the effort will form the backbone of a robust blue economy potentially worth trillions of dollars per year. Leveraging new energy technologies to power floats that are more durable, sustainable and scalable is key.

About the author, Yi 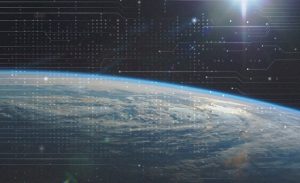